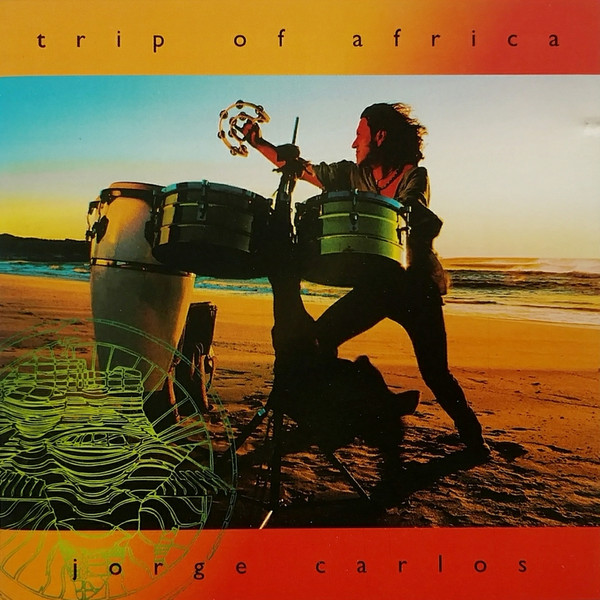 This issue of the SA Rock Digest went out on the 10th February 1999.

The SA Rock Digest is a free
subscription e-mag, edited by
Brian Currin and delivered
direct to your mailbox.

This is a discussion forum for anything about
South African rock music; past, present and future.

Read it, digest it, enjoy it, add your comments and tell your
friends….

This is a new section that I’ve added to the digest. Every week
(it looks like the Digest is weekly now!) we will feature a different
album. Feel free to comment on the reviews featured and to
send in your own reviews on your favourite albums; old or new,
well-known or obscure, no matter…

This week, Sugar Segerman from Amuzine has graciously supplied
his review of the stunning Trip Of Africa album from Jorge Carlos.

Jorge Carlos Arrigone is an Argentinian-born South African musician
and engineer who works out of the Red Hot Rhythm Section studios in
Cape Town. After producing numerous soundtracks for TV and movie
commercials, Jorge took over a year to produce the album ‘Satellite
Cafe’, by his wife Ayala and then settled down to record this,
his debut album. Although very influenced by the trance music styles
currently in vogue, Jorge has added a whole range of African sound
bytes, samples and cutting-edge rock devices to create this energetic,
evocative and completely essential SA album. ‘Cape Axe’ utilizes live
rock guitar licks to beef up a cooking trance track while ‘Dye@Koke’
(cool song title!) is possibly the first African trance track with its
selection of African sounds and styles.

Jorge Carlos played all the instruments on this album and produced
and engineered it as well. Songs like ‘Electric Ocean’ (not that
web company’s theme tune!), ‘Majordome’ and ‘Calling Of The Whales’
surge along on a bed of beats, sequencers and sound effects. The CD
boasts a beautifully shot cover and booklet that for once creates a
package that highlights the content of this album to its best advantage.

This album runs for over 70 minutes and can be played loud for a
non-stop party rave or softly for those laid-back sunny afternoons.
It has a fresh and original sound and its textures and pacing makes
‘Trip Of Africa’ the first trance album that can safely crossover to
the non-dance market. With several overseas companies showing interest
in this album, it’s kudos to NebulaBOS for having the vision to
release this album as part of its “Indie Music Explosion” distribution
campaign. There is a strong feeling that this exceptional album could
just be this new record company’s first big hit and deservedly so.
‘Trip Of Africa’ is a shimmering, exciting and “trippy” album that will
be around well into the year 2000 and beyond. And keep your eyes and
ears peeled for further music by this versatile and talented musician.

Jorge Carlos has arrived and SA music will never be the same again.
Highly recommended!

{Brian “I Can’t Dance” Currin: This is dance music for people who don’t
like dancing! It reminds me of such musical geniuses as Jean-Michel Jarre,
Vangelis, Tangerine Dream, etc. I also recommend it highly}

RAMSAY MACKAY, WHERE ARE YOU?

Does anybody know what happened to Ramsay Mackay after he left Freedoms
Children? Did he make any further albums and if so, please provide some
details.

LOOKING FOR THE ROAD TO PARADISE?

I am looking for the words and/or sheet music/midifile to the song
“Paradise Road” which was a big SA hit in the 70’s or 80’s for a SA
group called JOY.

It would be really appreciated if you could help me ASAP!!!

Is a band called (I think) the DATA CHILDREN, or was it the DATA CLAN,
mentioned anywhere? They later became Tribe After Tribe when they got
to America after being smuggled out of SA by Amnesty International.
I’ve got all the Tribe stuff but would love to hear some of the earlier
stuff, apparently they were quite known for the odd Deep Purple cover
live!!

I am a South African, now living in Oregon, USA, and co-presenting a
2-hour weekly show, called Women In Music (featuring any lady who makes
great sounds!), on KRVM.

I have played my Henry Ate CD frequently on the show, to very good
response, and there is a growing interest in hearing more SA music here.
I see you have some of my fave “old” artists on your site. If you know
of anyone who can get tapes/cd’s across to me, I’ll make sure they get
played. Please contact me, or get some material sent over to the address
below.

The web site for the station is krvm.com, if you’d like
to check us out.

Another song of merit was the appropriately (for now) titled “1999”
which the lead singer tried to revive last year apparently without
much success.

Peter is referring to The Brian Davidson Band’s revival of the Freedoms
Children track “1999” released in 1998 on the “Cape Town Vibes” CD.

Piet Botha – Goeienag Generaal, I’m not sure who actually plays this
guitar solo, because a number of guitarists are listed on the cover,
but what a cold-shiver inducing solo – stunning.

Andre Fourie – Purple Haze by the Sixty Something Band (also for his
rendition of Jimi Hendrix’s Star-Spangled Banner with Nkosi Sikele
thrown in!)

Johnny Mair – This Boy by Sweatband (also Johnny B Goode live at the
Pig and Whistle in 1986 – spine-chilling!)

Willem Moller – Sex by the Pressure Cookies
(Willem’s guitar solo on the Live Fact version of Climb Up On My Music
by Rodriguez is also one of my Magic Moments in Music) – read more at:
http://www.rock.co.za/files/livefact.html

Scott Miller – She’s Not There by The Forbidden Planet cast, only in
live performance during the shows at the Baxter in Cape Town in 1997.
Scott included every known rock riff into his solo which after 10
minutes finished far too early for my liking. Incredible!

{I was going to mention that the opening riff from Smoke On The Water
was also included, but then you might think you’re reading the wrong
Digest!}

There are a lot more, but these are what came to mind first…

I haven’t left off your favourite guitar solo to personally offend you,
so please send your comments and additions in…

This digest keeps getting better. I’d cry in my beer if I still drank.
I’m flattered that “Hungry For Love” made a top ten list. Where can I
get a copy? By the way, the A-Cads were me, Hank Squires and Robbie
Kearney (both formerly of Johnny Kongos’ G-Men), Sam Evans on vocals and
probably the best rock bass player on the planet, Les Goode (who, I
believe, came from John Sharpe’s band, The Squires, and was later with
Morocko). I heard that Gene Rockwell recently died — did a stint at
Cape Town’s Luxurama with him on the bill when I was with Bill Kimber and
the Couriers (bet no one remembers them) back in 1964. Nice to hear
about the Bats. Silly band (used to see them in Durban’s hotels), but
Peter was a good guitar player (formerly with Dusty Springfield).

Anyone knowing the whereabouts of musicians Les Goode and Mike Faure
should contact me. Also, where on earth is Lynne Boardman (not a
musician, but she knew a few)?

Can anybody tell me anything about a band called Seed?
I saw them a few weeks ago at Roxy’s in Johannesburg and they were the
curtain raiser to Springbok Nude Girls, but quite frankly, they
out-performed the Nudies by a mile.

Does anyone have any info on what they are doing now and how to get
hold of some of their stuff???

Can anybody give me info on a band called Splash? Their song “Eye To
Eye” is on a Gallo compilation called “Hits Of SA volume 2”. Wonderful
bouncy song with an African feel. Reminds me a bit of Yes, Steve
Winwood, etc.

Here is a list of my favourite SA rock albums, as of this moment!
(in alphabetical order):

Subject to change without notice.

Albums marked with an asterisk “*” are NOT currently available on CD.
(“..and why not?” you may well ask.)

Rumour has it that Hawk’s African Day will be released on CD sometime
in this (or maybe the next) millenium – watch this space for details!

Send in YOUR lists and I’ll post them here. List your top ten
favourite songs, albums, artists, guitarists, venues, whatever…

You are entitled to your opinion no matter how stupid :)

LET IT NOT HAPPEN AGAIN
(extract from Owen Coetzer’s article in the Argus Tonight,
1 February 1999)

The hidden years remain hidden. South African music makers, many of
them, have absolutely no idea of the superior quality of the “oldies”.
It is not their fault but the fault of the mainstream record companies
for not pushing what they had recorded in the first place.

Vanished from this country are the likes of Robert John “Mutt” Lange,
currently billed as the world’s finest record producer, and husband of
Shania Twain.

The legacy of failed opportunities is the millstone record companies
must bear. On their shoulders lies the iron blanket shackled over
South African music for so long.

They could have done better. They could have made sure the talent that
showers the world’s markets stayed home where it belonged. But they did
not. Let it not happen again.

A number of the albums mentioned in this issue can be found on the
Indie stands in Musica, Top CD and other places…Piet Botha, McCully
Workshop, Jorge Carlos, Black-Eyed Susan, Short Attention Span,
Die Naaimasjiene (love that name) and lots, lots more.

South African Music Day will be on the 27th March.

More in the next issue…

The SA Rock Digest is compiled by Brian “Vagabond” Currin from the
“Too Good To Be Forgotten” internet message board, e-mails from
various Digest members and other sources.

The opinions expressed here are not necessarily echoed by myself, but I
try to keep an open mind. (After growing up in SA in the 70s and
spending 5 years in the Army, that’s not so easy!)

Any suggestions on format or content will be gratefully received, but
may be ignored. 8)

For the basic rules of the Digest please visit:

or I can e-mail them to you.

Want to know more about me, my websites and my love for music? Go to:
http://www.rock.co.za/files/

Post a message on the “Too Good To Be Forgotten” message board at:
insidetheweb.com/mbs.cgi/mb311757

Reading someone else’s copy of this e-mag?

Subcribe yourself by sending an e-mail to “mailto:vagabond@rock.co.za”
with any words or phrases that vaguely indicate acceptance.

Want to unsubscribe from this e-mag?

Surely not, but if you really must, then just send me an e-mail,
saying “I hate SA music”, “I’m bored” or “get my out of here” or
“I’ve had enough” or whatever, I’ll get the idea, eventually.